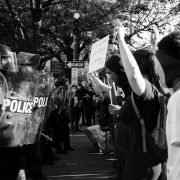 The brutal killing of George Floyd in Minnesota sparked outrage worldwide which were then followed by mass protests that originated in the USA and immediately spread to the UK. Many different issues lead to the protests – Read more about the background to the protests here.

What is racial harassment?

The racial harassment is the behaviour that has the purpose or effect of violating the other person’s dignity or creating an intimidating, hostile, degrading, humiliating or offensive environment for that person.

In 2019 Equality and Human Rights Commissions (EHRC) published a report about racism in the university campuses in the UK. The inquiry found a quarter of minority ethnic students, including non-British white students, experienced racial slurs and insults, including the N-word and the P-word in the campus. Among the reported incidents, two-thirds came from other students and one third from the academics.

Universities have a shared passion for tackling racial issues and are proposing reforms and other support for its students to eradicate racial discrimination once and for all. University students in the UK are known for having a sound platform to amplify their voice in current affairs, and even though these events happened in the USA, they quickly were recognised by leading institutions and put at the forefront of their agenda.

Universities have a shared passion for tackling racial issues and are proposing reforms and other support for its students to eradicate racial discrimination once and for all. University students in the UK are known for having a sound platform to amplify their voice in current affairs, and even though these events happened in the USA, they quickly were recognised by leading institutions and put at the forefront of their agenda.

Let’s have a look at how some UK  universities  reacted to the unfolding event of “Black Lives Matter.”

Much focus has been on Bristol following the removal of the statue of slave trader Edward Colston from the city centre then dumped in the docks. They removed some windows and are also currently reviewing a logo featuring Edward Colston. They are a determined institution to tackle racism in all its forms and are promoting a speak-up culture that places responsibility on all of us. In the past five years, they have seen a 44% increase in BAME student enrolments.

Here is a list of their campaigns to support.

Many students have had their grades appealed after the trauma of George Floyd’s death. There are also petitions to remove a Cecil Rhodes statue for representing colonialism and racism.

Read more on the protests in Oxford here.

UCL has undertaken frivolous action to do as much about racial inequality as possible. Recognises white privilege in its institution that is reflected in the profile of staff who reach senior positions in their organisation. They are pledging to change this by using Fair Recruitment Specialists on appointment panels and are tackling intersectional injustices through their Athena Swan action plan to tackle the fact that Black women’s experiences of promotion have been disproportionately negative.  Read more on the UCL page here.

As many as 10,000 attended the forming a mile-long line along the seafront activists holding signs staged a silent protest on Saturday afternoon. Read more here.

The student union has produced a detailed campaign statement discussing and responding to police brutality by providing an abundance of resources for ways to understand or donate to the cause.

Check out their detailed post here on what you can do.

Has listed some questions online that we must repeatedly ask ourselves:

Check them out here.

The Parkinson building on campus lited purple to support #BlackLivesMatter.

MU has also taken a great approach to the black lives matter movement in the UK. Sociologists at Manchester have produced a pioneering Our Migration Story resource for UK educators to support the decolonisation of the curriculum in British schools and contest dominant narratives of what British identity is, making anti-racist resources freely available for use in classrooms. Students at Manchester are involved in decolonising their curriculum, and many petitions are circulating about this.

Regarding their operations, they have appointed a lead for race equality, achieved the race Equality Charter Mark which improves representation and have launched campaigns through the student union to educate and support students.

Principal and Vice-Chancellor of the University of St Andrews, Professor Sally Mapstone, today apologised on behalf of Scotland’s first University for past failures to value and elevate Black, Asian and Minority Ethnic (BAME) students and scholars.

To support change, the University of St Andrews has also published, for the first time, comprehensive Equality, Diversity and Inclusion Progress Reports.  The reports also include detailed information on attainment and retention, and provide important context for the actions the University is taking to improve BAME representation.